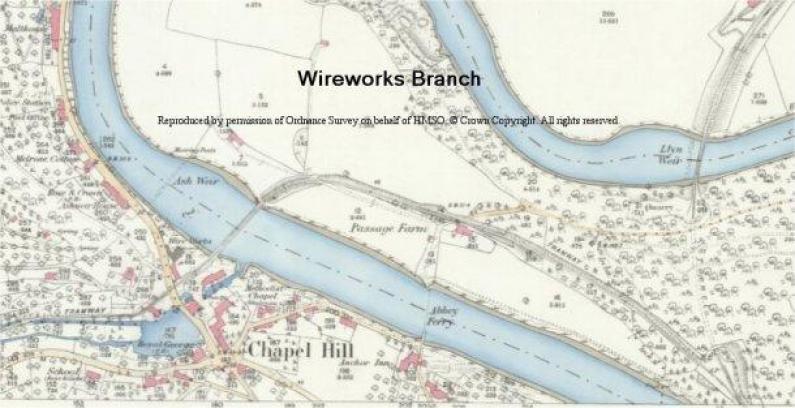 The proposed route of Wye Valley Railway from Chepstow to Monmouth by-passed the village of Tintern, which is on the opposite (western) bank of the River Wye. Hence, an agreement was signed on 22 November 1872 between the Wye Valley Railway Co. and the Duke of Beaufort (the landowner) that the former would construct a branch (the Wireworks Branch or Tintern Railway) across the river to serve the Abbey Wireworks. Work commenced on 5 June 1874, the contractors being Messrs Reed Bros. & Co. of London, and the branch was completed by August 1875, 14 months before the main WVR line. It was just over half a mile long and included a truss-girder bridge over the river. However, the Abbey Wireworks closed in August 1875, and the branch was dormant until the Abbey Wire and Tinplate Co. re-opened in the early 1880s, only to close for good by 1901. The branch was then used by Messrs J. Jones & Son, who owned a sawmill and turnery at Tintern, to carry goods in horse-drawn wagons. By 1935, the track had become unusable, and it was lifted in 1941. Ownership eventually passed to the Gwent and Gloucestershire County Councils, and the bridge and trackbed now provides public access from Tintern to the woods on the Gloucestershire side.