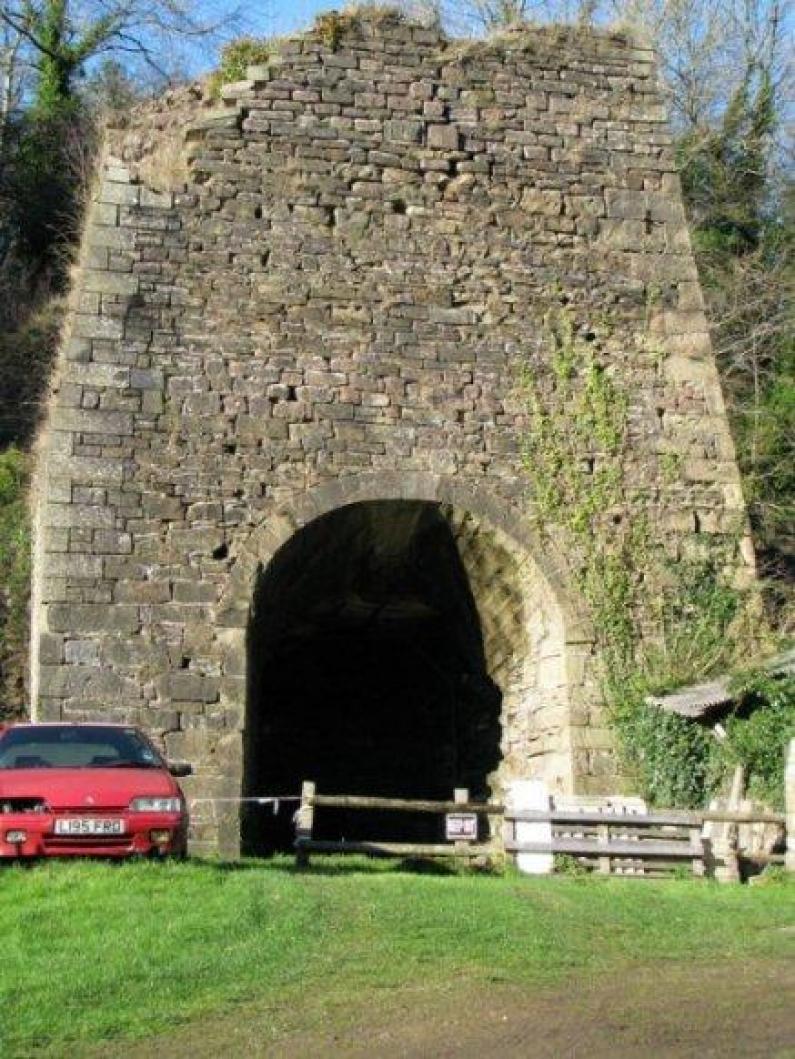 Whitecliff Furnace on the Coleford to Newland road is all that is left of Whitecliff Ironworks, one of three coke-fired ironworks built in Dean at the end of the 18th century. The other two were at Cinderford and Parkend. James Teague went into partnership in 1797 with Samuel Botham and John Bishton to build the ironworks. Later William Phillips joined them. The first furnace of the ironworks (now no longer in existence) was set close to a cliff side to enable the raw materials - coke, iron-ore and limestone - to be put into the top of the furnace from the cliff top. Coal for the coke and iron-ore were no doubt obtained from Teague's many mines in the area. In the winter of 1797-98 what had been completed of the works was destroyed by flooding from the nearby river, and the financial loss that ensued forced Botham to retire from the scheme. Phillips also left shortly after.Thomas Halford, a London stockbroker and businessman, now joined Teague and Bishton. Together they finished the project and the furnace was blown in, that is loaded with raw materials and ignited, in 1801 or 1802. By 1802 the partnership had been reorganised. There were now four partners: Teague, Halford, Isaiah Birt and a man called Wickenden. Teague was appointed to supervise the day-to-day running of the works. But the ironworks did not prosper, perhaps because of Teague's lack of experience, more likely because, with the techniques of the time, the furnace could not satisfactorily smelt Forest iron-ore with coke made from Forest Coal. In 1806 a second furnace was built to the north of the first. This is the building still standing and known as 'Whitecliff Furnace'. The output of the works was still unsatisfactory. Halford, now the dominant partner, edged the other partners out and in 1810 persuaded David Mushet, a brilliant young Scottish metallurgist, to come to Coleford, become a partner and manage the works. But Mushet withdrew from the partnership after six months. No clear reason for leaving has been discovered. Halford, alone now, continued for a few years, but gave up and became bankrupt in 1816. Later parts of the works were sold off to Cinderford Ironworks. The remainder, with the exception of the second furnace which still stands, was destroyed. In spite of the hard work and money poured into the Whitecliff Ironworks, it never made much money and lost a lot. The remaining furnace, slowly decaying despite attempts to keep it in good condition, still stands under the white cliff. It is, as a contemporary said, a lone monument to thousands of pounds of lost investments.