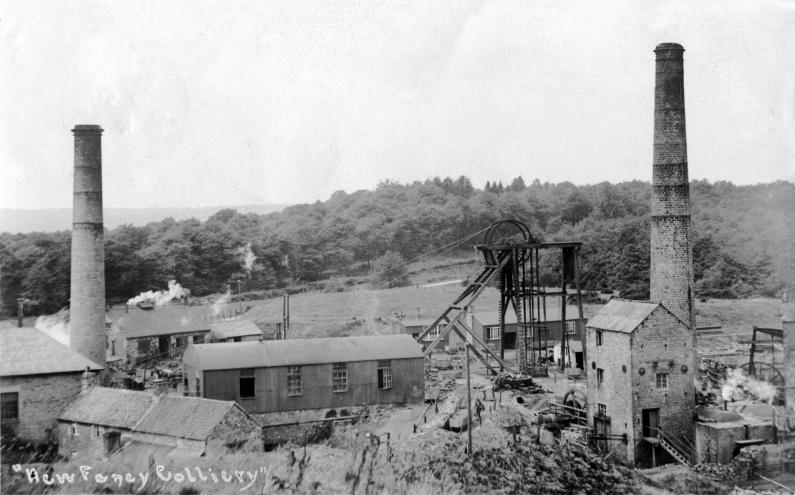 The Protheroe family appear to have had interests in the New Fancy gale (a gale is an area of a coal seam or iron ore vein) since the early 1800’s. The gale itself was certainly being worked by 1840, probably through the Parkend gale, as in that year Protheroe stated that he required a ‘better, cheaper, outlet’ for his New Fancy coals. The cheaper outlet would come about by sinking a shaft on the New Fancy gale thus avoiding the wayleave charged by the Crown on all coal from one gale passing into another.  The New Fancy gale award covered the coal in the Churchway High Delf, Rockey, Starkey, Park End High Delf, Little Delf and Smith Coal veins.

Work at New Fancy then commenced and by c1852 it would appear that there were two shafts in the process of being sunk.  The shafts were completed in mid to late 1857, as at the first half-yearly meeting of the Forest of Dean Central Railway Company in February, it was stated that the colliery ‘was in a forward state and will when opened afford large traffic’.  The colliery was producing coal by 1860 when 250 tons a day were being sent over the Severn & Wye’s Kidnalls Mill, or Moseley Green, branch of the tramroad.  It was to be another ten years before the colliery gained a railway connection in the form of a branch of the Forest of Dean Central which was authorised under a Crown license dated 6th April 1868.  The large traffic hoped for over this route diminished rapidly when the Mineral Loop line was opened in 1872 and a connection was made to the colliery.  It is likely that the rails on the Central’s connection had been removed by 1878. 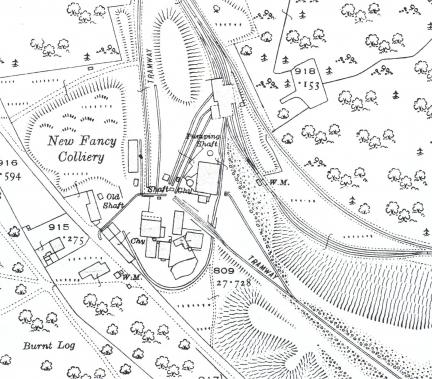 Ownership of the colliery changed several times between 1878 and 1883. Whatever the management was, the colliery closed in 1883 due to the heavy mortgages and in 1884 Thomas Hedges Deakin, together with Fanny Toomer and Susan Broadley, acquired the collieries.  New machinery was installed, including the first compressed air coal cutters to be introduced in the district.  The reason for their introduction was the high cost of coal production at New Fancy due to the thinness of the seams.  They averaged only 17 inches with the thickest being the Parkend High Delf at three feet high.

From about 1888 onwards coal from the Parkend gale was worked out through New Fancy as the shaft was closer to the coal being worked and therefore haulage costs were reduced.  By December 1889 the company had acquired the deep gales underlying their property. The company continued trading until in March 1892 when the Parkend Deep Navigation Collieries Co. Ltd. bought up the company.

In 1914 electric equipment was installed to power pumping plant, haulage engines and coal cutting machinery. The generating station was alongside the Castlemain pumping engine at Parkend and a pole route was constructed to bring the power to the colliery.

At peak production in 1906, the colliery was producing about 500 tons of coal per day, and employed approximately 700 workers. However the output of New Fancy subsequently steadily declined until final closure in August 1944. During the lifetime of the colliery just over 3.5 million tons of coal were mined, over half of that amount before 1880. Records indicate that 15 men died at New Fancy during the period that it was a working colliery.

This short history was provided by Ian Pope. You can find histories of other mines in the Forest of Dean at http://lightmoor.co.uk/forestcoal/Coalopen.html