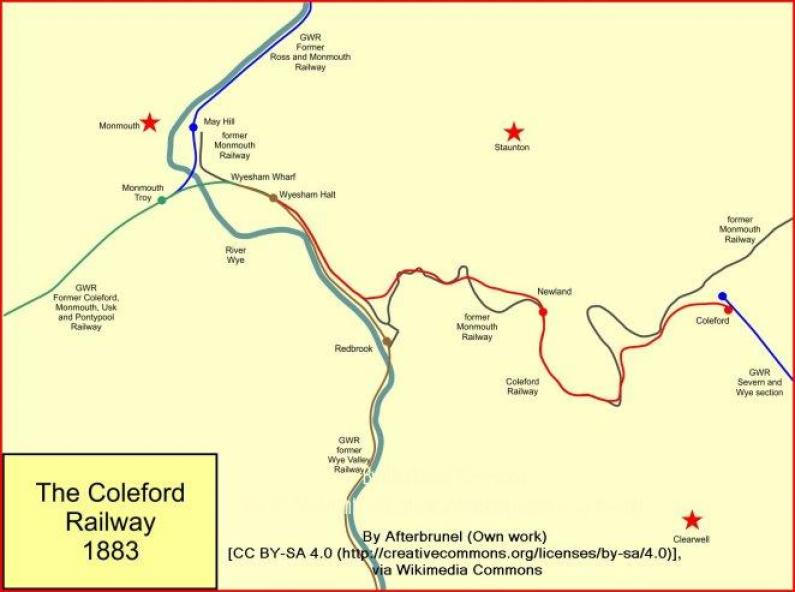 The Coleford Railway Act, authorising construction of a line from Wyesham Junction (with the Coleford, Monmouth, Usk and Pontypool and the Wye Valley Railways) to Coleford, was passed on 18 July 1872. However, construction did not begin until 1880, with Reed Bros & Co. of London the contractors. The 8.4 km line was finally opened on 1 September 1883. It was worked by the Great Western Railway from the start, amalgamation with that company occurring on 1 July 1884. The line climbed some 150 m between Monmouth and Coleford on gradients mostly between 1 in 40 and 1 in 67, and it had several sharp curves, so it was a difficult one to work. Stations were provided at Newland and Coleford, the latter adjacent to, but initially quite separate from, the Severn and Wye Railway’s establishment. Traffic, even goods, was never very plentiful, and the line closed as from 1 January 1917, most of the track soon being lifted for the war effort. The line from Whitecliff Quarry to Coleford and the former S&W line continued in use for carriage of limestone until 1967. The Newland station site was used by the Royal Air Force (59 MU) during World War II, the tunnels at Redbrook and Newland being used for storage of ammunition.Evidence: earthwork, extant building, structure, subterranean feature.