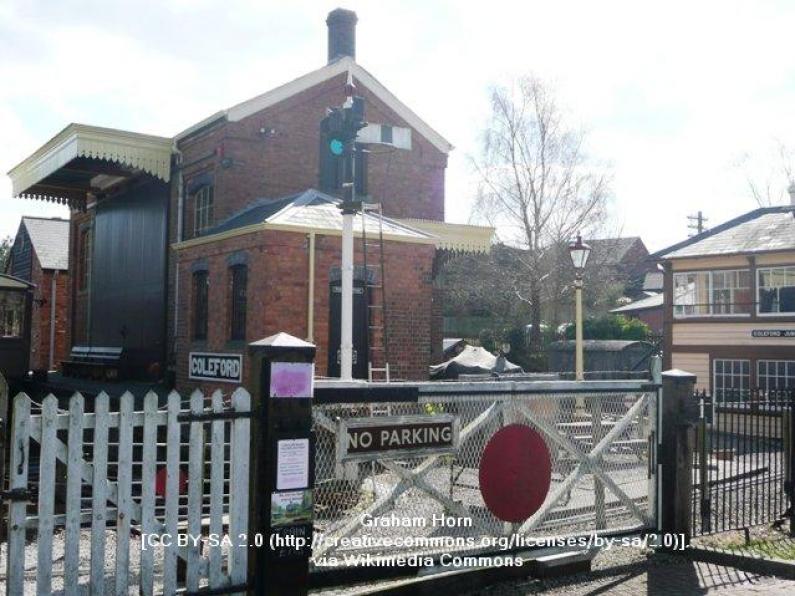 Coleford Station was the terminus of the Coleford Railway from Wyesham Junction, near Monmouth, which opened on 1 September 1883, being worked by the Great Western Railway from the start. It was adjacent to the Severn and Wye Railway’s station, which served that company’s branch from Parkend. The GWR station had a loop, with a single platform. The passenger accommodation comprised a hipped-roof, brick and stone building, with a shallow canopy integral with the roof. It contained the booking office, booking hall, waiting room and toilets, and a signal cabin was situated alongside. Beyond the passenger station were several sidings and a brick goods shed. It was two years or so before a connection between the GWR and S&WR stations, via the goods yard sidings, was brought into use. After closure of most of the line from 1 January 1917, passenger traffic used the S&WR branch, but the section from Whitecliff Quarry to Coleford continued in use for carriage of limestone until 1967. A more direct connection with the former S&WR was made in 1951. The station building was not demolished until the 1960s when redevelopment of the site began, but the goods shed was saved by the efforts of Mike Rees in the 1980s. Evidence: extant building.